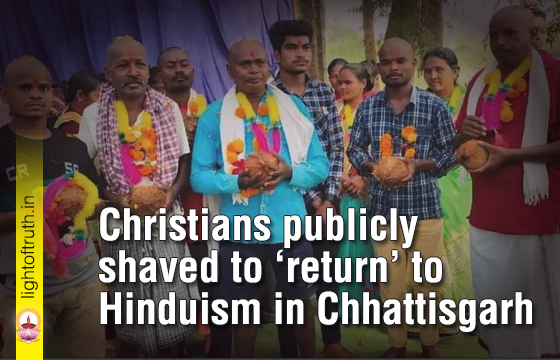 Christians publicly shaved to ‘return’ to Hinduism in Chhattisgarh‍

To achieve this goal, Hindu extremists shaved their heads and put coconuts in their hands as part of a Hindu religious ritual. Such acts were accompanied by the threat of seizing land, homes and properties owned by Christians and having them denied access to publicly owned forest land if they did no

First Indian layman to become saint on May 15

Pope Francis will canonize Devasahayam Pillai, together with six others, during a canonization Mass in St Peter’s Basilica on May 15, 2022. The announcement was made November 9 by the Congregation for the Causes of Saints. It follows the Ordinary Public Consistory of May 3 this year whereby the Pope had authorized the canonizations, without […]

A Catholic priest who tried to help two nuns illegally detained in last month’s Mau incident reported from the northern Indian state of Uttar Pradesh is planning to approach the high court to save himself from likely arrest. “I am planning to move the state’s top court to discharge me from the case I was […]

Jesuit Father Cedric Prakash has won this year’s “Louis Careno Award” for excellence in journalism. The Indian Catholic Press Association, the national body of Catholic print media persons, on November 8 selected Father Prakash for the annual award in recognition of his bold writings against communalism and fundamentalism gaining ground globally. The association will confer […]

India has witnessed a significant rise in violence against Christians this year with 305 incidents recorded across 21 states during the past nine months. Surprisingly, official cognizance of the targeted violence was lax with only 30 complaints registered by police so far. September had the highest number of incidents with 69, followed by 50 in […]

Archbishop Peter Machado of Bangalore has condemned the continuous harassment on the Christian Missionaries in the state and questioned the wisdom behind conducting a survey on their presence and activities in Karnataka. The Backward Classes and Minorities Welfare Department in Karnataka has ordered the officers to conduct a survey of both official and non-official Christian […]

Pope Francis to UNESCO: ‘The Gospel is the most humanizing message known to history’

‘Our Church is a place of serious crimes,’ France’s leading prelate says, as bishops adopt reforms

Copyright © 2021 Sathyadeepam. All rights reserved. No Part of this site should be reproduced without owner's permission