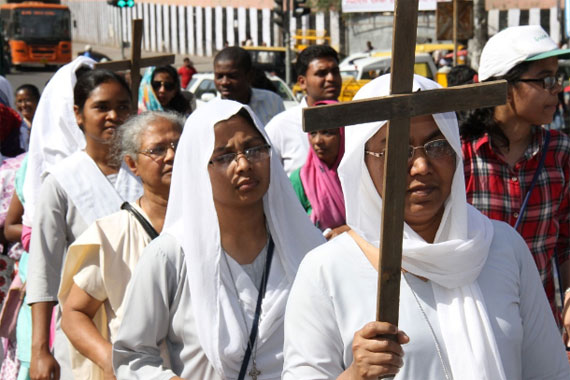 A member of parliament from India’s Andhra Pradesh State has alleged that Christian missionaries use money for religious conversion, a claim rejected by church leaders and activists. Raghu Ramkrishna Raju, the minister who represents the southern state, claimed in a television debate on May 25 th

I read the article ‘Why the Modi government gets away with lies, and how the opposition could change that’ by columnist Shivam Vij in The Print. With due respect to Shivam Vij, the article is superficial, and only reveals the fatuity and intellectual vacuity of the so-called Indian intelligentsia. In times of elections in India, it is […]

The first Indian from the deaf and dumb community on May 25 pronounced his first religious vows, in a historical and rare event. Brother Joseph Thermadom made became a member of the Holy Cross Society as the congregation’s novitiate at Yercaud in the southern Indian state of Tamil Nadu State. Joseph hails from the Ernakulam-Angamaly […]

Members of the Sikh community won several hearts as they sanitized the Delhi’s Jama Masjid ahead of Eid, a Muslim that ends a month of fast and penance for Muslims. The incident, which has set an example of communal harmony in front of the country, took place on May 23. Jama Masjid will remain closed […]

Indian Churches to raise prayer of hope on May 31

All Christian denominations in India have decided to pray together for their nation on May 31, the feast of Pentecost. “As we struggle through these unprecedented times, we come united as one, believing for a better tomorrow, believing for a Covid-free India,” says a press release announcing the Prayer of Hope. “We abide by the […]

South Asia region of Salesians of Don Bosco this year has a total of 83 novices making their first profession. They were trained in five novitiates in India – Chennai, Darjeeling, Dimapur, Kerala and Shillong – and one in Colombo, Sri Lanka. Salesian South Asia region consists of India, Bangladesh, Sri Lanka, and Nepal. Of […]

Copyright © 2020 Sathyadeepam. All rights reserved. No Part of this site should be reproduced without owner's permission